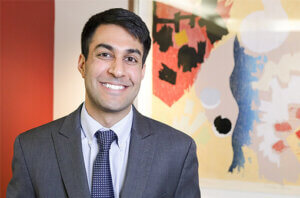 Brown, Goldstein & Levy attorney Neel Lalchandani was designated a Maryland Rising Star for civil rights by Super Lawyers, an honor reserved for no more than 2.5 percent of lawyers across the State of Maryland. Neel was previously named to this list in 2020 and 2021.

Neel Lalchandani represents individuals, nonprofits and companies in a diverse array of civil rights and commercial matters. Among other victories for his clients, Neel has helped secure several of the largest payments in Maryland history for victims of police misconduct, including over $16 million in state compensation on behalf of innocent men imprisoned for crimes they did not commit. He is also part of the BGL team representing three men known as the “Harlem Park Three,” who each served 36 years in prison for a murder they did not commit.

Neel is an adjunct faculty member at Georgetown University Law Center and a board member of Civil Justice. He is also a member of the Lawyers’ Alliance for the Public Justice Center and of the Maryland chapter of the Federal Bar Association. Prior to joining the firm, Neel clerked for the Honorable Roger L. Gregory, Chief Judge of the United States Court of Appeals for the Fourth Circuit and for the Honorable David O. Carter on the United States District Court for the Central District of California. During law school, Neel received the Gerald Gunther Prize for Outstanding Performance in Constitutional Law I, Judge Thelton E. Henderson Prize for Outstanding Performance in Community Law Clinic, and recognition for his pro bono service.

Super Lawyers is a rating service of outstanding lawyers from more than 70 practice areas who have attained a high-degree of peer recognition and professional achievement. Both the Super Lawyers and Rising Stars lists selection process includes independent research, peer nominations and peer evaluations. To be eligible for inclusion in the Rising Star list, attorneys must be either 40 years old or younger or in practice for ten years or less.

Founded in 1982, Brown, Goldstein & Levy is a 20-lawyer law firm based in Baltimore, Maryland, with an office in Washington, DC. The firm is nationally recognized in a wide variety of practice areas, including complex civil and commercial litigation, civil rights, health care, family law, and criminal defense. Above all else, Brown, Goldstein & Levy is a client-centered law firm and has decades of experience bringing passionate, effective advocacy to your fight for justice.