“Bricks on the ground”: The Supreme Court’s latest attack on the separation of church and state. 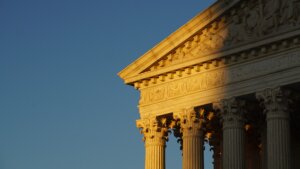 At Brown, Goldstein & Levy, our appellate practice is a key component of the firm’s work to improve the law. Our appellate lawyers have briefed or argued over 100 appeals in federal and state courts across the country. We have written the book on appeals in Maryland, as co-editor of Appellate Practice for the Maryland Lawyer: State and Federal. Our attorneys’ expertise includes writing certiorari petitions to the Supreme Court and amici curiae briefs to appellate courts in high-impact cases. One such case is Kennedy v. Bremerton School District, wherein BGL’s Andy Levy, Anthony May, and Lauren DiMartino filed an amicus brief with the Supreme Court on behalf of Bremerton community members in support of the District. To our dismay, the Supreme Court’s decision in favor of Kennedy has not only disregarded those community members’ collective experience, but it has also shattered the foundation of First Amendment jurisprudence and the separation between church and state as we know it.

Following the Supreme Court’s decision in Kennedy, law Professor Kate Shaw opined that the “wall” between church and state now looks more like “bricks on the ground . . . That’s basically it, at least when it comes to schooling . . .” Kennedy involved a high school football coach who, from 2008 to 2015, led dozens of football players in on-field, Christian prayers. The Supreme Court held that this conduct was “doubly protected by the Free Exercise and Free Speech Clauses of the First Amendment” and that the Bremerton School District, a state-run public school system, had violated Kennedy’s rights by trying to curb his behavior. In so ruling, the Court has muddled a fundamental area of U.S. law: the government’s ability to regulate religious expression—and coercion—in public schools. Beyond its effects on First Amendment jurisprudence, the Bremerton decision is the latest example of the Court’s unpredictable approach to precedent and highlights the conservative supermajority’s willingness to distort facts in order to achieve desired outcomes.

Beginning with his hiring in 2008, Coach Joseph Kennedy knelt alone at the fifty-yard line—the center of the football field—immediately after each Bremerton High game. By 2015, Kennedy was holding aloft student helmets after games, surrounded by kneeling teenagers, as he delivered Christian-inflected speeches, which he described as prayers. When the School District learned of this practice, the superintendent sent Kennedy a letter, reminding him of the neutrality required of public-school employees under the Establishment Clause of the First Amendment. Though Kennedy at first complied with District directives, he retained counsel a month later. His lawyers informed the District that Kennedy would resume his mid-field, post-game prayers. Press began appearing at games, as did a state representative who prayed with the team, and Kennedy began making media appearances.

The media spectacle culminated at Bremerton’s 2015 homecoming game. In the weeks leading up to the game, Bremerton High administrators received hate mail, and Satanists called the school detailing plans to conduct post-game ceremonies on the field as long as other groups were given that privilege. At the conclusion of the game, members of the public stormed the field to join the kneeling coach and players, while protestors yelled from the sidelines. After the game, the District placed Kennedy on paid administrative leave and did not renew his contract for the following year.

Kennedy brought suit in federal district court, alleging that the District violated his First Amendment rights. He lost at both the trial and appellate levels, at which point the Supreme Court stepped in.

Ignoring the facts that guided the lower courts’ decisions, the Supreme Court majority characterized Kennedy’s conduct as “brief, quiet, personal religious observance.” The Court found that “[t]he District disciplined [Kennedy] only for his decision to persist in praying quietly without his players after three games in October 2015.”

But, as Justice Sotomayor pointed out in her dissent, looking only at three October games misses much of the whole affair and “contravenes precedent”: “The question before the Court is not whether a coach taking a knee to pray on the field would constitute an Establishment Clause violation . . . It is whether permitting Kennedy to continue a demonstrative prayer practice at the center of the football field after years of inappropriately leading students in prayer in the same spot, at that same time, and in the same manner, which led students to feel compelled to join him, violates the Establishment Clause.”

By answering the former question instead of the latter, the majority ignored much of the factual context so that Kennedy would prevail. In doing so, the majority reshaped Establishment Clause jurisprudence—without fully admitting it.

The Court found that longstanding factors—such as whether a school official’s conduct would appear, to a reasonable observer, to be a government endorsement of religion—were no longer relevant to determining whether the conduct violates the First Amendment’s Establishment Clause. The Court claimed that use of these factors was “long ago abandoned.” As Professor Shaw and her colleague, law Professor Leah Litman, have pointed out, this form of “passive voice lawmaking” is new and does not bode well. It paves the way for justices to repeatedly ignore settled law and then point to that behavior as evidence that the law is dead, through no fault of any current justices. The conservative supermajority can thus avoid the scrutiny—even backlash—that a forthright overruling might invite.

So, in place of the “abandoned” law, what did the Court leave us? To determine whether a school employee’s religious conduct is coercive and unconstitutional, we must now consider “‘historical practices and understandings,’” focusing on “original meaning.” This language provides little guidance and promises additional litigation in this space, as schools, employees, students, and parents endeavor to understand everybody’s respective rights.

As attorneys at Brown, Goldstein & Levy learned through our involvement with this case, the burdens of that clarifying process will likely fall on students. Uncertainty and strife following the ruling may also endanger religious minorities and those who have relied on a longstanding social contract in this country: public schools educate, while guardians reserve the exclusive right to inculcate religious or non-religious values in their children and charges. BGL attorneys were proud to bring the voices of these communities to the Court through an amicus brief. They shared the experiences of a former Bremerton High football player whom Kennedy coached, a local Rabbi, and a community leader, among several others.

These individuals’ stories highlight one of the important effects of the Establishment Clause. Besides guarding against state-imposed religion and religious persecution, the church-state wall bolsters peace in a pluralistic society. A neutral public sphere forestalls tensions that might otherwise arise among people with different beliefs, assuring them that they are all equally valued and respected. With Kennedy, the Supreme Court threatens that neutrality and peace.

Not only has the church-state wall been reduced to bricks, but the ground on which it stood—honest lawmaking, adherence to liberal democratic values, and an eye towards a shared future—looks increasingly shaky.

This blog post was primarily authored by BGL summer associate, Catalina Odio. At the time of publication, Catalina is a third-year law student at Yale Law School, where she is a Student Attorney and Student Director at Yale’s San Francisco Affirmative Litigation Project. She previously worked at the Colorado Attorney General’s Consumer Protection Section, Immigrant Justice Corps, and Office of the Vice President of the United States.