$1.9 million settlement for parents of man with Down syndrome killed by Frederick County sheriffs.

“Nothing can compensate the parents for the loss of their chilD” 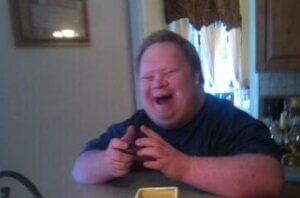 The parents of a man with Down syndrome killed when Frederick County sheriff’s deputies dragged him from his seat in a movie theater have settled their lawsuit for $1.9 million. Ethan Saylor was 26 in January 2013 when three deputies, despite recognizing that he had Down syndrome, arrested him for the “crime” of trying to watch a movie a second time without buying another ticket. The deputies dragged Ethan, who had been sitting quietly waiting for the movie to begin; they wrestled him to the floor, where his larynx was broken. The wrongful death lawsuit also alleged excessive force and violations of the Americans with Disabilities Act.

In addition, as a result of lobbying by the Saylor family, Maryland now requires that law enforcement officers be trained in how to interact with people with intellectual and developmental disabilities.