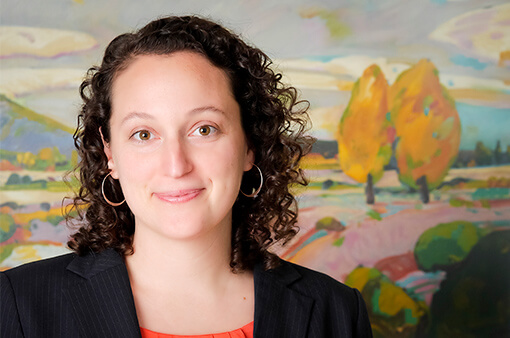 Jessie Weber, partner at Brown, Goldstein & Levy, LLP, was named to the 2021 Lawdragon 500 leading plaintiff employment and civil rights lawyers guide for employee and civil rights litigation, including disabilities. This guide, which selects attorneys based on rigorous research, nominations and journalistic vetting, honors top lawyers across the United States who have devoted their careers to representing workers. The selection recognizes extraordinary achievements in cases involving discrimination and other civil rights matters, wage and hour violations and individual employment claims. Jessie was previously named one of the 500 leading plaintiff employment lawyers nationally by Lawdragon for both 2019 and 2020.

Jessie enjoys helping clients navigate a diverse range of difficult legal issues, with a focus on civil rights. Jessie’s successes include obtaining a $1.25 million settlement for a class of Baltimore City school bus drivers and attendants wrongly denied their full pay, securing an injunction requiring the Maryland Board of Elections to make absentee voting accessible to voters with print disabilities and winning an arbitration award of more than $250,000 on behalf of an African American former Hooters server who was fired from her job because of the restaurant’s racially discriminatory image policy.

Jessie has been chosen each year annually for inclusion on the Super Lawyers’ Maryland Rising Stars list – an honor reserved for only 2.5 percent of attorneys in Maryland. She received a Baltimore Business Journal 2020 Leaders in Diversity Award, which acknowledges professionals in Baltimore City who have made diversity and inclusion part of their mission. Jessie was also chosen to receive the Daily Record’s 2017 VIP Award. In 2013, Jessie was given the Daily Record’s Leading Women Award, which honors 50 women 40 years of age or younger for notable accomplishments in their careers. She is a board member for Disability Rights Maryland and FreeState Justice, where she previously served as board president for three years. She is also a member of the ACLU of Maryland’s Committee on Litigation and Legal Priorities and a permanent member of the Fourth Circuit Judicial Conference.

Lawdragon is a legal media company that provides free online news and editorial features, including its well-known guides to the nation’s leading lawyers.

Founded in 1982, Brown, Goldstein & Levy is a 20-lawyer law firm based in Baltimore, Maryland, with an office in Washington, DC. The firm is nationally recognized in a wide variety of practice areas, including complex civil and commercial litigation, civil rights, health care, family law and criminal defense. Above all else, Brown, Goldstein & Levy is a client-centered law firm and has decades of experience bringing passionate, effective advocacy to your fight for justice.