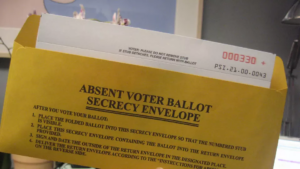 Today, a coalition of disability organizations filed a lawsuit against the New York State Board of Elections (“NYS BOE”) for excluding New Yorkers with disabilities as their Absentee Voting program expanded in response to COVID-19. The lawsuit charges the state agency with discrimination against voters who are unable to independently and privately mark a paper ballot due to print disabilities, including blindness and low vision, or physical disabilities such as paralysis, dystonia, and tremors. All New Yorkers deserve to vote safely and independently, especially during the COVID-19 crisis.

New York’s Governor Cuomo responded to the threat of COVID-19 on voters by expanding the Absentee Voting program to allow all voters in New York State to request an absentee ballot for the June 2020 Primary Election. This program requires voters to fill out a paper ballot and return the ballot by mail, providing no alternatives to accommodate individuals with disabilities who are unable to independently and privately read and mark a paper ballot from home. New York’s absentee voting program forces individuals with disabilities to choose between their health and their right to vote privately and independently from home.

The plaintiff organizations have repeatedly informed the New York State Board of Elections about the inaccessibility of paper ballots, to no avail. New York offers military and overseas
voters the option to receive an email ballot. Voters with disabilities could easily mark such a ballot electronically, increasing their privacy and independence in time for the June 2020 elections, but the Board of Elections has refused to offer this option to voters with disabilities.

New York’s Absentee Voting program can be made accessible, as Maryland, New Mexico, Colorado, Oregon, Ohio, and West Virginia have done. Defendants are aware of the need for accessibility and the availability of accessible solutions, including a free offering from the state of Maryland, and have refused to implement reasonable modifications to the program.

“Lack of accessibility in voting has existed for decades. The time to fix it has long passed. This is just one more example of our clients, friends and family members being systematically disenfranchised from another fundamental part of life.” said Timothy A. Clune, Executive Director of DRNY

“Voting is more important than ever for people with disabilities,” said Susan Dooha, CIDNY’s Executive Director. “New York State needs to step up to the plate to offer a tried and true solution to inaccessible paper ballots. We are about to celebrate the 30th Anniversary of the Americans with Disabilities Act. What better way to celebrate than to enfranchise hundreds of thousands of New Yorkers with disabilities?”

“The New York State Board of Elections has a history of using outdated technology to discriminate against voters with disabilities, and it has to stop; pencil and paper aren’t good enough anymore.” said Christina Brandt-Young, Managing Attorney for Disability Rights Advocates

“Just as all other New York residents have the right to vote via absentee ballot, the state must provide an accessible voting method that blind residents may use remotely,” states Dan Spoone, President of the ACB, headquartered in Alexandria, VA. “No voter in the United States, whether blind, or otherwise, should be compelled to reveal their vote when technology exists to enable them to complete all aspects of the voting process privately and independently.”

“The National Federation of the Blind has fought successfully for blind and deafblind voters for decades – including for accessible absentee voting in Maryland– and this advocacy is more urgent during this pandemic,” said Mike Robinson, president of the National Federation of the Blind of New York. “The nation’s blind will not tolerate being treated as second-class citizens here or anywhere else.”

This lawsuit was filed in the Southern District of New York under Title II of the Americans with Disabilities Act and Section 504 of the Rehabilitation Act of 1973. Rather than monetary damages, plaintiffs seek reform to the systems and practices that discriminate against voters with disabilities in time for the June 2020 elections.