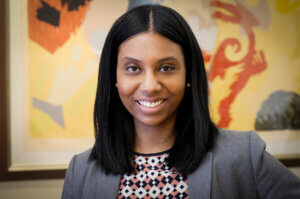 Chelsea Crawford, partner at Brown, Goldstein & Levy, will join a prestigious group of Maryland lawyers and businesspeople invited to serve on the Transition Team for incoming Attorney General Anthony Brown. In her role, Chelsea will sit on the Steering Committee and will co-lead the Public Safety Policy Team alongside Michael Pinard, co-director of the Clinical Law Program at the University of Maryland Francis King Carey School of Law, and Sonia Owens, special counsel for the Internal Revenue Service.

As part of the Steering Committee, Chelsea will advise Brown as he develops a vision and establishes priorities for his upcoming term, set to begin in early 2023. The Committee will convene regularly to monitor the progress of transition activities and review transition memos prepared by current Office of the Attorney General staff to identify First 100 Day priorities and actions. The Committee will produce a final transition report by the end of February 2023.

The Transition Team will include the Steering Committee and seven teams focusing on different issue areas: consumer protection, civil rights, public safety, labor, environment, procurement, and equity and ethics. Each team will have two co-leads who are also members of the Steering Committee. Chelsea and the transition team will hold a public forum to allow members of the public to provide input. In addition, Chelsea will meet with relevant individuals and organizations and interview relevant division chiefs and agency principal counsel. The Public Safety Policy Team will transmit a written report in mid-February for inclusion in the financial transition report due to the Attorney General by the end of February.

Other members of Brown’s Transition Steering Committee are:

Chelsea Jones Crawford joined Brown Goldstein & Levy in September 2015 and has a growing, diverse civil rights practice, including substantial work in wrongful conviction, police misconduct, and disability rights cases. At Brown, Goldstein & Levy, Chelsea has worked on some of the largest wrongful conviction and police misconduct cases in the State of Maryland. In 2021, she obtained a $6.5 million settlement on behalf of the family of Eric Sopp, an unarmed man in distress who was shot and killed by a Baltimore County police officer. It was one of the largest settlements in State and County history. A former journalist covering daily news, Chelsea brings a passion for storytelling to every case.