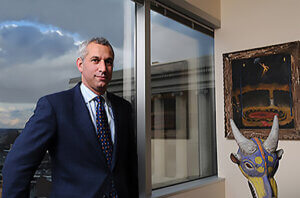 Brown, Goldstein & Levy partner Andy Freeman has been recognized on this year’s Chambers USA list in the category “Litigation: General Commercial in Maryland.”

Andy is well-known for obtaining justice for his clients. He has secured numerous million- and multi-million-dollar verdicts, judgments, and settlements by mastering the relevant law and getting to know his clients and their problems. Andy is frequently sought out by clients and other lawyers for cases that require complicated combinations of law and facts or present novel legal issues.

Chambers and Partners is an independent research company, often referred to as the “gold-standard” that delivers detailed rankings and insight into the world’s leading lawyers. The Chambers rankings are based on findings by an experienced team of legal researchers.

Founded in 1982, Brown, Goldstein & Levy was born out of a strong commitment to social responsibility and providing top-notch legal services. The firm has since grown to 22 lawyers and maintains a thriving national practice in a variety of areas, from commercial litigation and civil rights to criminal defense and complex family law. The Brown, Goldstein & Levy team is nationally recognized and has decades of experiences bringing passionate, effective advocacy to your fight for justice.