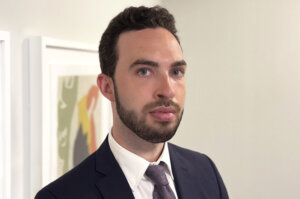 Hali was one of millions of Americans who struggle with a substance use disorder. While pregnant, Hali was prescribed buprenorphine, a form of medication-assisted treatment for opioid use disorder and the standard of care for pregnant women with such addictions. Nevertheless, because the hospital tested Hali’s urine for drugs, and she tested positive for opioid use, Hali was arrested—six days after giving birth—for violating Alabama’s “chemical endangerment of a child” statute. The Washington Post reported her story, as reproduced here.

Hali was placed on a $10,000 cash bond, with her bail conditions including mandatory inpatient addiction treatment. Yet, she was told that a bed in an inpatient program would not be available for weeks. In the meantime, she was separated from her baby and her older daughter. Hali faced these punitive sanctions despite being on the established medical treatment for her addiction.

Many women like Hali—in need of reproductive healthcare while also having a substance use disorder—receive stigma and criminal sanction instead of medical care. As a result, pregnant women who use drugs avoid treatment, leading to worse healthcare outcomes.

Unfortunately, this is just one example of the many ways that people struggling with addiction face stigma in the healthcare system. Sean Fogler, a physician who is in recovery from a substance use disorder, writes:

Similarly, in a qualitative study of the experience of drug users in healthcare, one participant, Maria, responded to the stigma she has faced: “They look at us like junkies, but you know what? This junkie right here bleeds the way you bleed, have feeling the way you have feelings, . . . What’s the difference between your love and my love?”

In at least some cases, the law has answers for such inhumane mistreatment.

First, because a substance use disorder may be a disability protected by the Americans with Disabilities Act, the mistreatment that people with addiction face can amount to illegal discrimination.

For example, the Legal Action Center reports that hospital emergency departments often fail to adhere to evidence-based practices for responding to substance use-related medical emergencies. This includes failure to screen for and properly diagnose substance use disorders, failure to prescribe medication-assisted treatment for opioid use disorder, or failure to facilitate referrals to addiction treatment.

“Where the denial of any of these evidence-based practices is because of hospital personnel’s stereotypes and assumptions . . . rather than legitimate medical considerations, or where the hospital’s administrative methods have the effect or purpose of discriminating” against people with addiction, the failure may be “disparate treatment” discrimination under the ADA. Likewise, “[w]here the hospital denies a patient’s request for one or more of these evidence-based practices” without justification, the denial may violate the ADA as a failure to reasonably accommodate.

Second, an emergency room’s failure to follow best medical practices can also violate the Emergency Medical Treatment and Labor Act, or EMTALA. STAT News highlighted the story of a mother who took her son, Michael, to the E.R. for treatment of his withdrawal symptoms from an addiction to opioids. She wrote: “[A]fter a 12 hour wait, he was turned away. We were told his withdrawal was not bad enough. Today, he is dead.”

The emergency department is often the place where families like Michael’s turn for help. Under the EMTALA, the hospital “must examine all patients . . . for conditions that pose a serious health risk and stabilize any such condition before discharging them.” Thus, “[i]n Michael’s case, the law required the emergency department to assess him for a substance use disorder, offer buprenorphine . . ., connect him to the ongoing medical care needed to treat his life-threatening illness, and provide him with naloxone to reverse any future opioid-involved overdoses.” When a hospital fails to meet these requirements, the patient may have a right to sue under the EMTALA.

Finally, a hospital’s mistreatment of a person with a substance use disorder may implicate Title VI of the Civil Rights Act. As the Legal Action Center’s report explains, “Black, Latinx, and Indigenous people historically have been denied equal access to healthcare and, in some communities, have been disproportionately affected by the substance use epidemic.” Title VI bars entities that receive federal funding—including hospitals receiving Medicare and Medicaid funds—from discriminating on the basis of “race, color, or national origin.” When there is evidence that a hospital failed to provide proper treatment for a substance use disorder because of a person’s race, Title VI may provide a remedy.

Further, Title VI may apply where a hospital more generally “impedes access to these communities.” That is because Title VI, like the ADA, prohibits “disparate treatment” and “disparate impact” discrimination. “[Hospitals] that do not use evidence-based practices for Black, Latinx, and Indigenous people who present with substance use-related emergencies could be illegally engaging in either form of discrimination.” For the kind of evidence that could support such a claim, the Legal Action Center cited a study that found “Black and Hispanic patients who presented to two urban hospital [emergency departments] after opioid overdose were less likely than white patients to be administered naloxone,” the medication that saves lives by reversing opioid overdoses.

Ultimately, not all stigma faced by people struggling with addiction will give rise to a legal remedy. But when medical providers fail to adhere to evidence-based practices in treating substance use disorders, it may amount to illegal discrimination. As STAT News put it, “[t]he moral and clinical imperative for emergency departments to address substance use disorders is clear and pressing,” but if that is not enough, “perhaps the threat of legal liability will spur long overdue change.”

The attorneys at Brown, Goldstein & Levy have experience assisting clients who face discrimination because of their disabilities. We assist such clients as part of our nationwide disability rights practice, which strives to ensure that people with disabilities across the country receive the protections of the law. If you have faced discrimination because of a disability, contact us today at 410-962-1030 to discuss your situation.