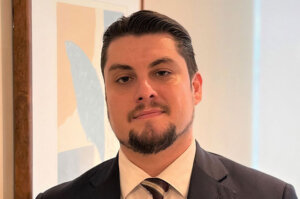 Brown, Goldstein & Levy is pleased to announce that Shane M.K. Doyle has joined the firm to represent clients in wrongful conviction and police misconduct cases. Prior to joining BGL, Shane clerked for Judge John M. Maloney on the Circuit Court for Montgomery County, Maryland.

Shane received his Juris Doctor degree from the University of Maryland Francis King Carey School of Law, where he graduated magna cum laude and in the top six percent of his class. He also received the 2021 Larry B. Shoda Award, which is given to a single evening division member of the graduating class for academic excellence. During law school, Shane was a legal writing teaching fellow, an Associate Editor on the Maryland Law Review, and the Written and Oral Advocacy Chair of the Moot Court Board. He also worked as a research assistant, where he interviewed and detailed the stories of former Maryland inmates who were paroled after the landmark Unger v. State of Maryland ruling. Shane also published a comment in the Maryland Law Review that was cited by the Maryland Court of Special Appeals. While earning his J.D. in the evening program at Maryland Carey Law, Shane worked full time as a paralegal/law clerk at BGL.

Before law school, Shane accrued close to a decade’s experience in the higher education field. He began his career in the Public Safety Department of Montgomery College while pursuing his undergraduate degree. Several promotions led Shane to working in college administration directly under the Vice President before switching career paths.

Founded in 1982, Brown, Goldstein & Levy is a 20-lawyer law firm based in Baltimore, Maryland, with an office in Washington, DC. The firm is nationally recognized in a wide variety of practice areas, including complex civil and commercial litigation, civil rights, health care, family law, and criminal defense. Above all else, Brown, Goldstein & Levy is a client-centered law firm and has decades of experience bringing passionate, effective advocacy to your fight for justice.