In a lawsuit filed in federal court today, Alfred Chestnut, Andrew Stewart, and Ransom Watkins seek justice for the 36 years they each served in prison for a crime they did not commit. As teenagers, the three men were wrongfully convicted of a 1983 murder of a Harlem Park Junior High School student. Now in their fifties, the men were exonerated of the murder in 2019 after the Baltimore City State’s Attorney’s Office re-investigated their case and determined that they were innocent. Their 108 combined years of wrongful incarceration is the longest in American history. 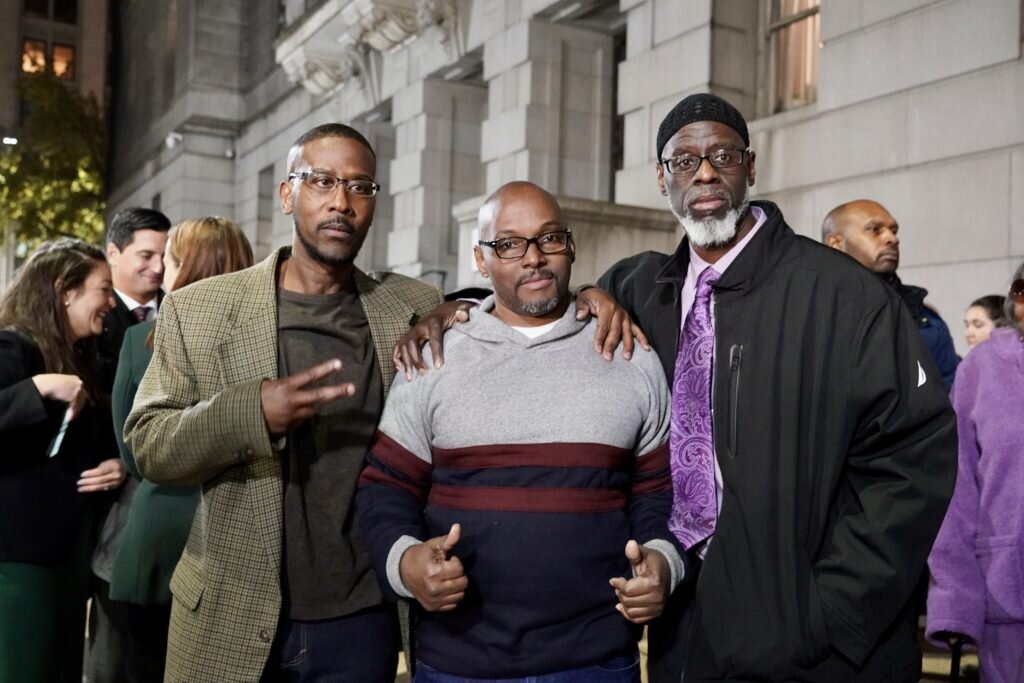 On November 18, 1983, someone approached 14-year-old DeWitt Duckett in a hallway of Harlem Park Junior High School, demanded the teen’s Georgetown University Starter jacket, and fatally shot him. Though Alfred, Andrew, and Ransom had visited the school earlier that day, they were not there at the time of the shooting. In a rush to solve the tragic murder that dominated news headlines, Baltimore Police Department Homicide  Detectives Donald Kincaid, John Barrick, and Bryn Joyce ignored the eyewitnesses and physical evidence and instead zeroed in on Alfred, Andrew, and Ransom as suspects. Between 1 and 2 a.m. on Thanksgiving Day in 1983, less than a week after the murder, BPD officers arrested the three 16-year-olds.

The lawsuit alleges that Detectives Kincaid, Barrick, and Joyce coerced false statements from three middle schoolers who were in the vicinity of the murder, and a fourth student, a 13-year-old, who had not witnessed the murder. The detectives manufactured a narrative that implicated Alfred, Andrew, and Ransom and got the teenage witnesses to adopt a tale that would match. Their false testimony was the only evidence that linked the three youths to the crime.

The detectives also failed to investigate evidence pointing to the likely true perpetrator. They ignored and suppressed evidence that one suspect was seen throwing a gun and running away from the school after the shooting, bragging about shooting DeWitt, and wearing DeWitt’s Georgetown jacket the night of the murder. The lawsuit also alleges that the detectives’ misconduct was part of a decades-long pattern of unconstitutional conduct within Baltimore’s Homicide Unit.

Known today as the “Harlem Park Three,” Alfred Chestnut, Andrew Stewart, and Ransom Watkins are seeking justice for the years of their lives lost behind bars. “When they sent us to prison as teenagers, they stole our lives from us. They took our families from us. They took our childhoods. This lawsuit can’t bring back everything we lost, but it’s an important step as we try to move forward and heal,” said Mr. Chestnut on the filing of today’s case. Mr. Stewart said, “I can’t describe what it felt like to sit in that prison cell, knowing we were innocent and that the system had failed us. I am so grateful to everyone who stayed with us, who believed in us and fought with us. We wouldn’t be free without them.” Mr. Watkins added, “This isn’t the end—it’s just the beginning. It’s the beginning of our lives as free men. And the beginning of holding the homicide detectives and police department responsible for what they did to us.”

The Harlem Park Three are jointly represented by Brown, Goldstein & Levy, LLP and Nathans & Biddle, LLP. “In their haste to close the investigation of a high-profile murder, the police detectives cut corners and threatened witnesses, then concealed that misconduct from the three defendants and their defense attorneys. That’s not the way our criminal justice system is supposed to work, but in Baltimore and elsewhere, it’s been all too common,” said Andrew D. Freeman, one of the lawyers for the three and a partner at Brown, Goldstein & Levy. Booth M. Ripke of Nathans & Biddle added, “What was done to these three children is a tragedy that will never be remedied. Their lives were taken from them. They deserve justice.”